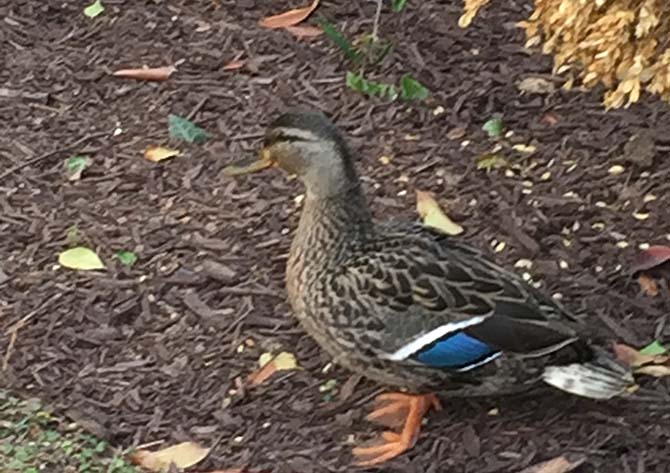 Last month, a couple of exciting surprises were discovered by staff in the backyard of the Home.  Under a chair, next to the small goldfish pond, and a few feet from a large holly tree, two ducks had quickly, and unbeknownst to the Home’s many occupants, built a nest. They were identified as American Black Ducks, closely related to mallards. One of them had a blue, black and white wing, and the other was mostly brown. The two ducks — after hanging out in the yard for a while — flew off, much to the relief of staff. However, they returned a few hours later, and soon an egg appeared in the hastily constructed nest. The following day, eureka, two more eggs appeared! Staff then realized that these ducks, without even completing an admissions application, were planning on staying in the Home’s backyard. Given the precarious nature of the situation for the future ducklings and mom and dad duck, we contacted Second Chance Wildlife in Maryland. They directed staff to the very knowledgeable City Wildlife organization that regularly assists in rescuing and helping ducks, and their ducklings, in precarious situations all over the city.  This time of year ducks nest in fountains, and other dangerous locations, so City Wildlife does what it can to obtain the most natural and positive outcome possible for these urban ducks.

Ms. Anne Lewis, of City Wildlife, informed staff of the following: Nesting ducks are protected by federal law and their nests cannot be disturbed. The female will lay between 10 and 17 eggs and will leave the nest off and on until all the eggs are laid. Once all the eggs are laid, she will stay on the nest, brooding them for 25 days. She will have been storing up fuel in her body so that she does not need to leave the nest to search for food or will have food brought to her by the male.  The male, once all the eggs are laid, will station himself down by the river or canal and wait for the female and the ducklings to arrive where he is staying. All of the ducklings will hatch within a few hours of each other and immediately the female will attempt to lead them to the water. This could happen in the middle of the night or in broad daylight. The City Wildlife experts will have an idea of when the eggs will hatch and will keep a watchful eye on the mother duck throughout the brooding process. Once the ducklings hatch and the mother begins her walk down to the water, the duck experts will attempt to assist them in their procession down Wisconsin Avenue, or perhaps a side street of Georgetown, to the water. The mother duck, in a miracle of nature, will know just how to get to where the male is waiting. Along the way, the ducklings will be tempting for rats and crows and possibly a cat. But, cars will be stopped and the mother and her ducklings, ‘will cross the road.’

City Wildlife has assisted in many endeavors of this sort before, often with success. The draining of the C & O Canal recently and the high river water may have been the reason the ducks decided to make their nest at 1255 Wisconsin Avenue instead of on a canal or river bank. This is perhaps the same pair that last year nested in a courtyard just a short distance down M Street from the Home. Whatever the reason, the Home, in approximately 30 days or so, will have between 10 and 17 more surprises! The Home’s backyard garden, for the time being, is off limits to all human activity except for monitoring, strategic assistance once the baby ducklings are born and some neck craning from a distance. Of course, nature being the beast she can be, may take her course. As Ms. Lewis explained — a little duck egg could easily find itself down the gullet of a rat or raccoon and our nesting pair could move on to a more suitable site.