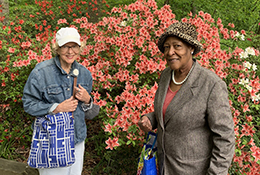 One thing that transplants from somewhere else appreciate about Washington is the enjoyable nature of the city’s many tourist sites. Who doesn’t like to roll out of bed early to hit the National Gallery of Art or Air and Space Museum—parking by 9:30 am to beat the crowds and summer heat—or walk across the Mall to see the Smithsonian Castle and let the children romp along the side of the Tidal Pool, or maybe take a ride on the National Mall’s colorful carousel?

Clomping up the storied steps of the Lincoln Memorial and embracing the glorious view of the Washington Monument and the Nation’s Capitol beyond is surely one of Washington’s great timeless tourist pleasures.

Once inside the 36 Doric columns of the monument, which represent the 36 states at the time of Lincoln’s death, we never cease to be amazed at the size of Lincoln’s statue, especially his enormous knees., gigantic folded hands, and epic stare. The nearby stone inscription of the Gettysburg Address with the famous words, “Four score and seven years ago” echoes out from history far above our heads, and upon occasion, we hear a resounding Star-Spangled Banner being beautifully sung from inside the chamber. Some of us ponder aloud how hard it would be to climb the statue and doubt the veracity of our high school friend’s tall tale that he, one raucous night with several pals hoisting him up, managed to scale Lincoln’s giant trouser leg and crawl into our 16th President’s lap for an unparalleled view and a unique experience. This was (if true) long before our current increased city security of course. We can see how our friend might have gotten up, but getting down without a collection of broken bones seems decidedly dubious.

On our way back to the car, we feel more somber passing the many war memorials—Vietnam, Korean, Women’s, World War 1, and World War 2, as well as FDR’s depression-era remembrance. Martin Luther King’s outstretched arms reach toward the Jefferson Memorial which, in mottled view across the Tidal Basin, is partially hidden amongst the cherry trees. All these monuments remind us of the great sacrifices of those who came before us. We often debate which is our favorite museum or monument while we ply our tourist guests with DC trivia, and decide which of the many reputable area restaurants to try. 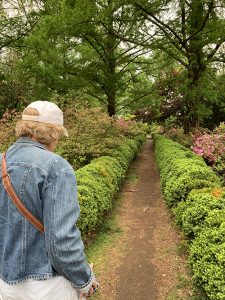 Keeping this DC tourist tradition alive, a few of us from the Home have been braving more outings these days, despite COVID’s lingering menace. We recently set out on an expedition to the National Arboretum, arriving just as it opened. We were especially interested in visiting the wondrous Azalea Hill in all its spring glory, with azaleas at peak bloom. We managed to complete our outing the day before heavy rain and high winds of a nor’easter turned the azalea petals into a soggy mess and left them strewn about the landscape in a last gasp of colorful beauty. We hiked a bit along the beautiful boxwood pathways,  exclaiming about all the different colors of azalea bushes, but our trek was cut short by barriers of orange tape and large signs warning us: Do Not Enter—Eagle Nesting area. We strained to see the nest in a large poplar tree, but at 80 feet up and in the midst of a forest of other trees, and with no binoculars at hand, we were out of luck. 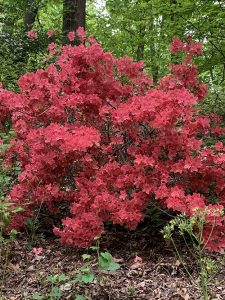 At the Visitor Center, we learned that a new eaglet named DC 9 (the 9th eaglet born to parents Mr. President and Lotus) had hatched on March 29, 2022. Lucky for us, the live streaming eagle cam on the big screen television behind the information desk showed dinosaurian-looking DC 9 in the nest, greedily gobbling down tidbits of fresh fish being delivered into its gullet from the beak of mama Lotus. The rangers believe that DC-9 is a male. One ranger explained that males are usually smaller than the females. When they brought the new eaglet down for a medical check-up, one of the things they did was to precisely measure his feet and talons to determine the sex as best they could. We vowed to return, as proper DC resident tourists are wont to do, in the summer months, and again in the fall, to see what other delights the National Arboretum might have in store for us.