Following the end of the Civil War, many women were widowed and in dire financial straits. In late 1867, “The Female Union Benevolent Society of Georgetown” rented what is now one of the oldest houses still standing in Georgetown to house some of these women. The Female Union begged door-to-door for funds to maintain the house. In February of 1868, Mark Twain gave a lecture at Forrest Hall in Georgetown on the Sandwich Islands (Hawaiian Islands) for the benefit of the Female Union. 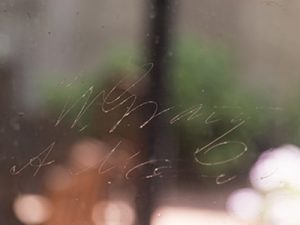 George Washington etched his signature into a window at the Home.

A windfall came not long after when W. W. Corcoran, founder of the Corcoran Gallery of Art, donated a check for fifteen thousand dollars with the stipulation that only the interest could be spent. For, said Mr. Corcoran, “no one woman or group of women is capable of spending such a large sum.” In the early 1900s, the Guests took in laundry and mending to earn “pin” money for themselves. The Board, in the 1950s, started to hold “silver teas” that were open to the public and donations were collected to subsidize other income to maintain the house.

The house has been added onto in stages. The original center section was built in 1756 as a private home. From 1804 to 1841, Sgt. John Lutz, George Washington’s bodyguard in Valley Forge, resided there with his family. George Washington’s signature is etched into the glass of one of the first-floor windows. He was a frequent visitor and the copy (where is the original???) of a note expressing the gratitude of the Washington family hangs in the foyer. In 1801 and 1802, the front and rear sections of the house were added. One unique architectural feature is the house still has its original flounder roof, and the original wood flooring which has been refurbished.

The house also links its history to the time of Abraham Lincoln. Sgt. Lutz’s grandson was the manager of Old Ford’s Theater. His wife, Laura Keane, was performing on stage as the leading lady the night Lincoln was assassinated. 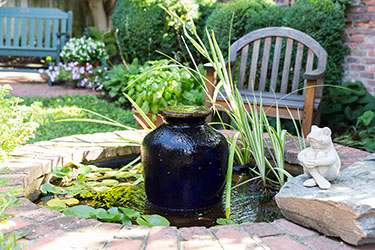 A garden fountain provides a place for quiet reflection.

The name was changed in later years to “The Aged Woman’s Home of Georgetown” (the Home) and has been in continuous operation since the start. The mission is to provide a safe and affordable shelter for women who are at least 62 years of age, in good physical and mental health, and whose finances do not exceed the poverty level. The Home can accommodate 11 women.