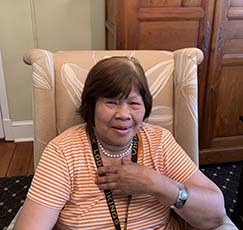 This month we continue our guest spotlight series, with not just one, but two guest profiles. 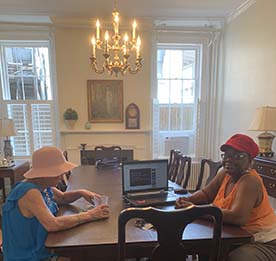 Our first profile features one of the Home’s newest residents, JB. She has been working working hard at computer classes with Byte Back, a free service for DC residents. Her first class, Technology 1, focused on everything about the computer—from hardware and software to emailing and computerized organizational charts. She passed the first course with flying colors and was the top student in her class. She is on to the second class now, Technology 2, which focuses on Microsoft Office, including Power Point and Excel. JB’s goal is to be capable of building a website. She would also love to utilize the computer for fun and to do volunteer work for her churches.

Our second guest profile features Erlinda T. Erlinda has been living at the Aged Woman’s Home of Georgetown for 6 years. She came to the Home after a long-term job as a cook and driver ended, and she found herself struggling to find affordable housing in DC. A neighbor, who knew about the Home, assisted her in applying and helped her to find transportation to and from the Home.

Originally from the town of Virac, Cafanduanes in the Philippines, the 75-year-old Erlinda had a circuitous and adventurous route to The Aged Woman’s Home. After graduating from high school and earning a Bachelor of Science Degree in Education, Political Science, Literature and the Filipino Language, Erlinda packed her bags and set off for Iran. In Iran, she earned money to send back to her 3 children and husband who remained in the Philippines. Erlinda obtained a job working as a private tutor for an Iranian family through the Embassy of the Philippines. While living in Iran for 8 years, she earned an International Certificate of Cooking. Erlinda remembers learning to cook many dishes as a very young girl and says that she has always loved cooking. During her years in Iran, she also self-taught herself Farsi. Erlinda has a natural talent for languages, as she is fluent in English and Spanish as well.

As a young woman, Erlinda traveled the world and saw many places, including Germany, London, Paris, Sweden, Norway, Saudi Arabia and Switzerland. All along the way she picked up new methods of cooking. When asked about how she cooks, Erlinda explains, “Never using a recipe. All you need is a kit of the right combination of spices, and you can make anything taste delicious.” After rigorous culinary training, Erlinda eventually moved to a position cooking for a Jordanian diplomat in Iran. He, like everyone before him, appreciated and loved her excellent cooking.

Erlinda’s next job came after she prepared a feast for a party that the Japanese Ambassador to Iran attended. She impressed him so much that he invited her to work for him and his family as their personal chef. At this post, Erlinda learned to speak Japanese and to make Japanese meals in the proper fashion. This involved cutting the vegetables in a specialized manner, setting a proper Japanese table with flower arrangements and ensuring the appropriate presentation for every meal.

In the early 1980s, the Japanese Ambassador was reassigned to a post at the Japanese Embassy in America. Erlinda and her cooking prowess followed. By the time she finished her career as a chef, Erlinda was proficient in cooking Persian, Japanese, American, Middle-Eastern, Indian, Pakistani and her original Spanish and Filipino cuisine. If you peek in her room here at the Home, you will find an amazing collection of international spices and unique fruits and vegetables from all over the world. She often creates—seemingly out of thin air—delicious meals for holidays and special events at the Home.

Erlinda has been away from her home country for many years, and in the time since she left, she has been widowed, her 3 children have grown and she now has 13 grandchildren and 2 great grandchildren with whom she keeps in constant contact. She is mindful in letters and telephone calls to teach them about the delicious creations she has learned over the years. Her youngest daughter and her granddaughter also are accomplished chefs.

Erlinda smiles cryptically when asked, “Who is the best of the cooks in the family?”. She says that when she visits, everyone wants her to cook. Her father, a veteran soldier of World War II, immigrated to the United States, became a citizen and worked for both the U.S. and Filipino Army before passing away in 1999. Erlinda says, “No one appreciated my cooking more than my father.”

Besides her culinary talents, Erlinda keeps her heart in her home country by always thinking of the Filipino people, especially the children. For years, once a month, she sends a box filled with books, toys, food and clothing to an organization in her hometown that passes the items out to those in need. We are happy she found her way to our community, and we appreciate her international chicken and potato salad. She also makes a mean caramel custard (leche flan).