Summer Has Arrived at the Home 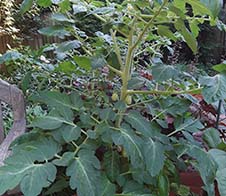 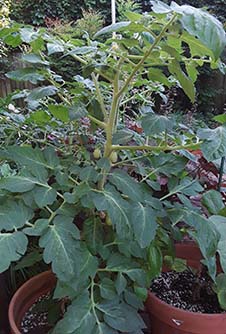 Summer has arrived at The Aged Woman’s Home, and we are excited that one of our newest Guests turns out to have a very green thumb.

Perhaps, at our next cookout, we will enjoy some delicious fried green tomatoes or a bit of salsa to spice things up.

A bit of fried green tomato trivia:
According to Robert F. Moss, author of The Fried Green Tomato Swindle and Other Southern Culinary Adventures, fried green tomatoes first appear in 19th century Northeastern and Midwestern cookbooks such as the 1877 Buckeye Cookbook and the 1873 Presbyterian Cookbook—put out by the First Presbyterian Church. In fact, they are not really southern at all. 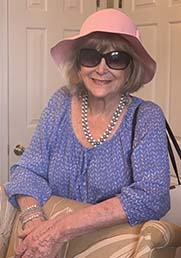 We’re kicking off a new blog series this summer to introduce you to some of the current Guests at the Home. Our Guests are a diverse group of women with a lifetime of stories that we know you will find interesting.

One of our longtime Guests, nicknamed Chivi, has been living at the Home for over 11 years and is originally from Santiago, Chile.  Chivi came to the United States in 1971 in her early thirties. She was asked to take a position as an Administrative Assistant with the Organization of American States. Fluent in English, Spanish, Portuguese, French, and understanding and speaking a bit of Italian, Chivi initially moved to Bethesda, Maryland and quickly came to love the D.C. Area with its international flair, museums, and beautiful trees. She missed her home country, especially the high mountains and the beautiful blue Pacific Ocean.

Eventually becoming a proud U.S. Citizen, Chivi, during her initial admissions interview at the Home, stopped the interview and asked if she could sing a song she had written and composed about 9-11. When she sang the song, “The Darkest Morning of September,” Chivi showcased her singing and writing talent. It was a beautiful song. Afterwards, she told the story of her father, a well-known folk musician in Chile, who appeared with his singing group in 1939 at Radio City Music Hall in New York City.  He and his group were responsible for spreading traditional folk music throughout Chile and teaching people about the traditional songs. Chivi herself was once part of a singing trio named Las Jinglers, who toured Argentina and Uruguay.

Besides her musical talent, Chivi is a multi-talented creative artist. She creates beautiful flower arrangements with simple natural items—leaves, plants, and sticks. She is also a very fashionable and elegant dresser. Recently, Chivi unexpectedly lost her beloved younger sister—age 76—a well-known television broadcaster in Santiago. She finds solace in the love she shared with her sister and the bonds she has created at the Home. A true artist, Chivi sings, writes, composes music, dances (classical and modern), and she shares her heart with us.

Click this link to hear a 1963 recording of the song “Un Besito en La Matine” by Las Jinglers (with our very own Chivi!).