Pipe Palooza at the Home 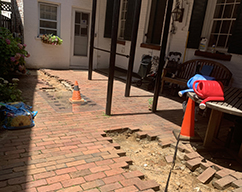 Things have been exciting here at The Aged Woman’s Home the last 8 weeks, and we want to emphasize the word Aged as well as the word exciting. Exciting, it turns out, can go either way—good or bad. In our case, things (although in the end turned out well) got very ugly and rather messy. 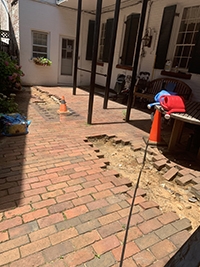 First, a very long pre-1900 terra cotta sewer pipe gave up its long and illustrious tenure. Once the pipe (similar to the terra cotta pipes used by the Babylonians 4,000 years ago and the ancient Romans) was roto-rooted, a high-tech camera was sent down the pipe to determine the source of the problem. The sewer technicians judged from their camera data that the pipe was misaligned, broken in various places, and leaking like a pre-Columbian sailing ship busted up on a hidden rock just off the coast of Barbados. Undaunted by this dramatic pipe mishap (and backed up sewer line) we quickly hired a company specializing in these types of pipe disasters. Apparently, (who knew?) this kind of pipe break-down issue goes on 24-7 around the Capital City. We are not alone in the backup universe. Yes, the company heard our cry and arrived quickly; yes, they could help us they said, but then, they gave us the bad news: The DC public space use permitting process can take 30 days. “Sometimes,” they said solemnly, “even longer, and we may have to replace the pipe all the way to the street. We won’t know until we do some digging.” 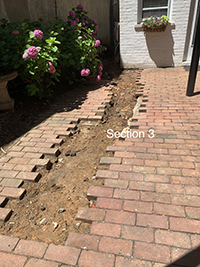 Suffice to say, eventually we got the permit; they did have to go all the way to the street (150 feet to be exact to the sidewalk on Wisconsin Avenue) and, they had to dig 5 to 6 feet down in some places. This meant a special crew and another type of permit.  It meant goodbye lovely landscaping and hello periods of no water. We are disappointed to report that with all this digging we did not find another of Clara Barton’s offices, Abraham Lincoln’s silver cufflinks, any rare 1756 china plates, or Civil War bullets. We hoped to discover Anacostian arrowheads, but alas none were found. We did, however, find a hornet’s nest and a bunch of old ghost pipes that led to nowhere. 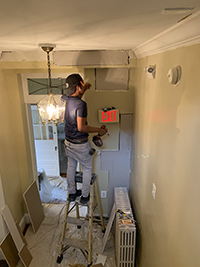 Just when this project was over, a pre-1900 pipe, this time behind the laundry room wall leading to a long-gone radiator, lost its mojo and decided to split in half and spray us and the nearby drywall with rusty water down to the first floor. Luckily, we just happened to have an experienced plumber on-site working on a bath renovation. Goodbye 1800’s galvanized steel, hello copper. 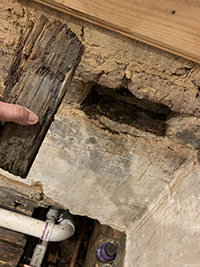 We did find something interesting behind the drywall on this second exciting pipe-burst: An old piece of wood used as a brick. We need some carbon dating for this one. Perhaps Martha Custis or Mary Todd Lincoln donated the wood brick to us. Who knows, maybe George Washington brought it over himself from Mount Vernon!