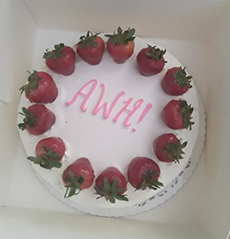 The Nacotchtank are an indigenous Algonquian people who lived in the area of what is now Washington, D.C. during the 17th century. Their village was situated at the intersection of the Potomac and Anacostia rivers, and it is the Algonquian people who gave June’s almost-super moon the sweet name of Strawberry Moon. Two smaller, affiliated villages, one between the C & O Canal and MacArthur Boulevard and the other, most likely along the west bank of the Potomac across from Theodore Roosevelt Island (Nameroughquena), also existed. Vestiges of the sites survive in the Tohoga historical district just two blocks south of the Home, which celebrates the fur-trading Nacotchtank (Anacostin) Indians who, long before the arrival of John Smith and the English colonists, made Georgetown a center of their fur-trading monopoly up and down the east coast. As we walk about the local streets near the Home we are treading on paths once traveled by these entrepreneurial and enterprising indigenous peoples.

On June 25th the Strawberry Moon delighted us with a spectacular moonrise in the early evening and achieved its apex a bit after 2 a.m. the following morning. If our early risers, of which we have many, had peeked out their windows to the west, they would have seen a spectacular moonset.  As we say goodbye to spring and hello to the summer of 2021, we are delighted to dive into a delicious strawberry shortcake cake from Randolph’s Bakery, our favorite.

We are also excited to report that two volunteers, Delia and Anna, have begun assisting at the Home. They will be with us for much of the summer, which will be a delight. 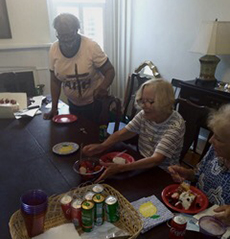