The Holidays Are Fast Upon Us 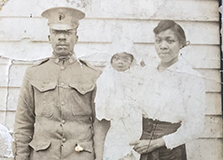 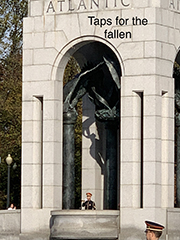 The holidays are fast upon us, and so is the season of giving, and of giving thanks. Veterans Day, a National Day of Remembrance of those who gave their lives in service to our country, was celebrated November 11. In Washington DC, for two days prior to this day, and for the first time in 96 years, the public was allowed to lay flowers on the Tomb of the Unknown Soldier. Located high on a hill at Arlington National Cemetery, the Tomb overlooks the city and contains the remains of service members from several wars, all posthumous recipients of the Medal of Honor given by the Presidents who presided over their funerals. This year, the pile of flowers solemnly placed by members of the public, along with the crisp fall air and peak autumn colors, reflected to us the beauty of service to others and gave honor to those who sacrificed so much. 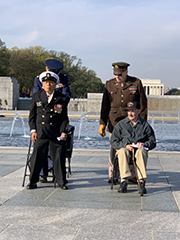 Another Veteran’s Day ceremony held at the WW2 Memorial honored the 16 million Veterans who served in that war. Veteran’s Day 2021 was blessed with beautiful weather, and those in attendance had wonderful views of the Lincoln, Jefferson, and Washington Monuments, as well as of the grand WW2 Memorial itself. With the fountains on at full force, five living veterans from WW2 were honored in a wreath-laying ceremony. Each Veteran, representing a different branch of the military, was escorted by a current member of their branch. Included among the 5 honorees was Robert Marovelli, a 96-year-old Navy veteran and father of the Home’s Executive Director, Erin Marovelli. Mr. Marovelli served as a torpedo man on a PT Boat in the Pacific Theater off the coast of Papua New Guinea. His boats sunk twice, and a third barely escaped heavy enemy fire during an attempt to rescue a beached boat in their squadron. Mr. Marovelli likes to say of his years of service, “I have always been glad I was a good swimmer” and to his children, “You should be too!” 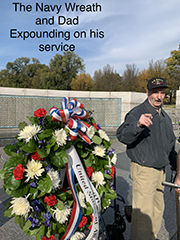 After the war, Mr. Marovelli, along with more than 2 million other GIs, attended college on the GI Bill. He later married, had children, and spent most of his career as a mining health and safety engineer for the Department of Interior. Mr. Marovelli recounted for the TV cameras, “They were shooting at us, and we were shooting at them, and those boats were really just a pile of mahogany and plywood bolted together. Nothing fancy. They had a ginned-up Packard outboard motor that could go fast when you needed it to, but never quite as fast as you wanted it to. It was no picnic, I can tell you, when those boats got hit, as it turns out wood is very flammable.” Mr. Marovelli joked when asked if he was on PT 109 with JFK when it sunk, “No, I was not, but luckily he was a good swimmer too.” When asked by a reporter how he felt about the day’s celebration, Mr. Marovelli said, “I just feel it is wonderful and such an honor to be thought of this way after all these years.” 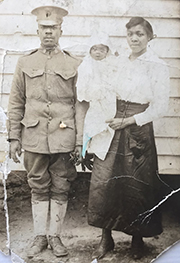 One of our Guests at the Home, Jacqueline Bennett also honored a Veteran on Veterans Day—her grandfather—Benjamin Pitts who served in WW1 and survived the 1918 Spanish Flu pandemic. After the war he returned to his ancestral home in Skipper’s, Virginia in Greensville County, adjacent to the North Carolina border. He married Jacqueline’s grandmother Rebecca Jenkins and together they had 8 children including Otelia, the oldest and Jacqueline’s mother. Jacqueline said, “He had everything on that farm—peanuts, tobacco, cotton, corn, hogs, horses, cows—and my grandmother made the best biscuits in Virginia. I do wish I had that recipe.”

Otelia eventually moved to Baltimore, Maryland, and married a handsome man from James Island, South Carolina. It was there in Baltimore that Jacqueline was born. During her childhood not much mention was made of the war her grandfather fought in, or the pandemic he survived, but now Jacqueline often thinks about what it must have been like for her grandfather to have survived both these catastrophes. “People back then,” she says, “Just got on with it.” Jacqueline has one memento, a picture of her grandparents holding her mother as a baby. As all of us who have tasted Jacqueline’s holiday pies can attest, while her grandmother’s Skipper’s Virginia biscuit recipe may have been lost to history, the family baking gene is still going strong in 2021.

Like many of you, our lives have been touched by the sacrifices of our Veterans, and we salute those currently serving in our armed forces at home and abroad. 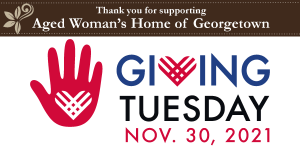